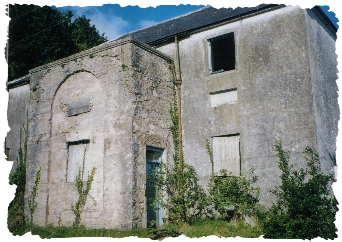 The Penal Laws eased eventually and with this new freedom the Irish were allowed open schools around the country. School was held indoors in an old barn or dwelling house. They replaced hedge-schools like that of Ballynamona, Moyglass and Cappacon. Indeed for some years the Primary school and the Hedge-schools existed side by side. The average cost of renting a building for school was £3 a year.The annual teacher's income was £15.
Up until 1834 Ballinakill had no school building but this was all going to change. Under the Stanley Act of 1834 Ballinakill received it's first school premises. The building was funded by the Burkes of Marblehill who were the landlords at the time.
The building though small, was quite comfortable; the walls were thick with heavy wainscotting and open turf fires.
One pupil was appointed to remove the cinders and ashes each evening and to deposit them safely in the adjacent lands. On one occasion however the student placed the red ashes underneath the stairs. A fire followed with the result that the students enjoyed an extra long holiday!!
This building was used until 1940 when it was deemed unsafe.